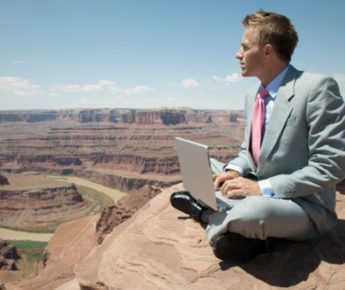 by ambyrne
Nov 8
2017
Lifestyle, OpinionRemote working is great in theory, but use it sparingly

About 10 years ago there was a big move by large companies in Ireland to follow the trends they were seeing coming from the US and in particular the blue chip and high value tech companies in terms of how they treat culture in the work place. Ireland, like much of the world still had the traditional model that people worked a 9 to 5 job and that culture and environment took a back seat to the getting the job done. While this didn’t mean that there wasn’t a good atmosphere or social aspect to working in the companies, there was a theme that work spaces were functional and methods of working were standard.

Along came the big, brash businesses in the States who had realized that to hire the best and most talented people for their roles they needed to stand out. A big salary with phone, laptop and health care was no longer enough to entice the new wave of people they wanted to have on their teams, they needed to create an atmosphere of fun and deliver working conditions that made people say wow, and made them feel less like they were working and more like they were part of a fun experience. 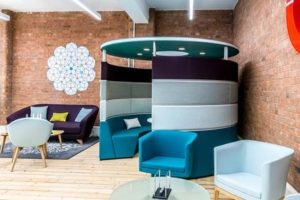 The standard layout of cubicles and glass offices was set aside in favor of open plan, bean bags and communal work spaces. They even played with the idea of removing designated spaces and desks in an effort to get people to interact with other departments and teams in the organisation and to make the employee feel less like they were tied to a desk and more like they were in an artistic and fluid space. Great ideas in theory, but a lot of businesses got it wrong.

The fortunate and clever businesses used this new way of working to their advantage and created a culture in their offices that made people feel at home. Not only that but people felt like staying at work longer, coming in earlier and being more productive. Sure, many of these places had facilities such as gyms and bike sheds, but all of a sudden some of the tech giants had band rooms equipped with musical instruments and equipment. They had fully stocked bars and shops that were discounted or even free to use, trusting that the employees would not take advantage of the availability of the same.

Because of these changes, people ended up building their social lives around their role. They worked, played and lived with the people around them in the same company and these businesses reaped the benefits of having people who would work more punishing hours, skip meals and generally make themselves comfortable in their work space. Irish businesses lapped up the perceived up tick in productivity, but not only that the secondary benefit that employee morale and overall job satisfaction was going up. Obviously they wanted to replicate the best of what was being exported from the US.

There was a problem though. A lot of the changes they made were cosmetic and didn’t really embrace the methodology that was being used. The assumption that changing the standard desks and swivel chairs for plush colorful couches and funky designed furniture would lead to over night change in the hard-coded way things were done. The fundamental thing that many of these companies forgot is that the US businesses that got this all right were the ones that started with that culture from the outset. Trying to force feed your existing business and climate with new ways would inevitably lead to a clash between people who enjoy working the traditional way and don’t know anything else, and the new bread of team members that were coming in expecting this flexible office environment. 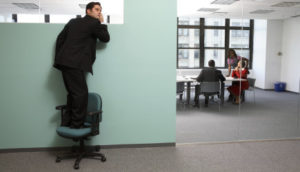 Soon you had managers who were not comfortable with not having a direct line of sight to their team members constantly e-mailing and contacting to ensure that they were working and not just hiding somewhere in the building. These people in turn felt like they couldn’t avail of the ability to sit at a hot desk on the other side of the office because they had to field the question of where they were which detracted from what they were doing. I’ve seen first hand companies who have tried and failed to implement this change in culture for this very reason. We also seem to have a distinct lack of trust in the people we employ which again defeats the purpose of giving them more flexibility.

Two worlds were colliding in the efforts to make the work place more fun and engaging, and while there were some organizations that succeeded it was the exception rather than the rule and seemed to be predominately in the tech or creativity space. Traditional industries like banking and older services seem to still struggle with this change, and while they pride themselves on the surface level changes that make it appear that they have embraced the new culture, there is a conflict going on between people who are set in their ways and the newer members who expect more, but must conform to the rules at the end of the day.

This brings me to the even more complicated phenomenon of remote working. It’s something that many companies tried to embrace and even fewer got it right then the new work space option. The idea was simple, give someone a laptop and systems access and, if it made more sense for them to work at home or in a cafe, they could. Again all the issues above were present and more. If proper structures for operations, meeting schedules and the acceptance that remote working was a reality in a business it tended to be a novelty that was only used if the weather was so bad roads became impassable, or as a way of sneakily getting people to work even if they had called in sick. I tried in one company to work remotely several times and almost always it was unsuccessful. Either someone was constantly checking up on me to ensure I wasn’t just slacking off, or worse, meetings were called at short notice and I’d end up packing my bag and heading in any way.

There is a lot to be said for being in the office anyway as many people are not disciplined to the point of being really productive when working off site, but also there is the interaction and social aspect which can’t be denied. It really comes down to the business though. Do they have the systems and processes in place to ensure that everyone benefits from some being in and others not. Are the methods used for communication and updating strong enough to ensure everyone can be working towards the same goal? If a company answers ‘no’ to any of these, or is unsure in any way, there’s no substitute for having everyone on hand and working together.