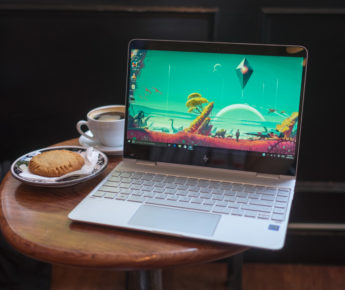 by ambyrne
Nov 10
2017
Lifestyle, TechnologyBefore you buy your next laptop think carefully about what you need it for 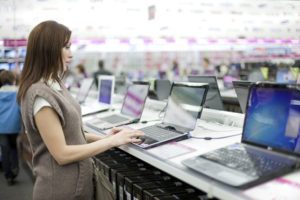 Buying a laptop can be confusing, but there some things to look out for

Between now and Christmas there will be an up surge in people buying laptops, both for themselves and for family and friends. Many small businesses will also consider replacing and updating in the sales that seem to inevitably follow the holiday season, and, although there’s plenty of choice out there, there are some pitfalls to avoid when buying a new device. Many people fall victim to the adverts on television or the so-called expert advice of store sales assistants, and you may end up with a piece of hardware that doesn’t cover what you are looking for. What’s worse is that in most cases, once the packaging has been opened on electronic devices, there is no change of mind or return.

So what’s the issue and why is there such a difference in prices on laptops? There are the obvious things that should be considered before making a purchase like this. First and foremost is your budget. If it’s the case that you need to work inside a certain price range don’t worry, as long as you take your time you will more than likely find something in that bracket that fits your particular needs and requirements, but there are advantages to spending a little bit more.

You’ll see a lot of ads and posters for laptops from as little as €299 coming up to the Christmas period, trying to convince you that you get all the bells and whistles for such a low price. If you’re just looking for something really basic to browse the internet with and to update your Facebook page or maybe work on a little college work on the go this is probably sufficient, but bare in mind that you are sacrificing certain things by going for a cheaper option. Storage space, graphics and speed. Chances are you’ll also get a machine that’s slightly heavier and possibly not as sleek and good-looking as more high-end machines.

Let’s talk storage to start with. I’ve browsed around PC stores and electronics retailers recently and been amazed that they tout the size of the hard drives as a major selling point. The specifications sheets beam with all sorts of figures that the average user isn’t really familiar with, so lets take a quick look at what to avoid and what is a good idea. Hard drives are the storage space on the laptop and contain everything from your photos and documents to the programs and apps installed on the machine. An important thing to remember before we go any further is that the space you buy isn’t all yours to use. The operating system like windows as well as any other programs like Word or Photoshop installed eat into this space also. Windows for example can take up a large amount of space and if your hard drive is small this will limit you, but we’ll get back to sizes in a minute. 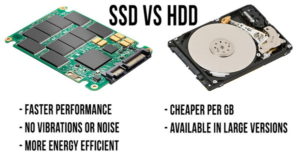 The hard drive might be one of your most important considerations

First thing to note is that there are two main types of hard drive for personal computers, both with pros and cons. SSD or solid state drives which have no moving parts which means mechanically there’s less that can go wrong and also are generally faster than traditional hard drives which have spinning discs and a magnetic reader. These HDD’s or Hard Disk Drives are sometimes shown as SATA drives. You don’t need to worry about SATA, it’s actually the connection between the drive and the rest of the computer, so for the purpose of this we’ll talk about solid state and spinning disk (HDD). Solid state as I said are faster in general and if you drop the laptop there’s less mechanically that can break (don’t try this btw) but for the size that you get they are much more expensive. The cheaper laptops around the 300 euro mark often have these drives as they can give you a seemingly huge 32GB drive without increasing the price.

Here’s the catch, 32GB (32 Gigabytes) is quite small in reality. Most key drives these days have about the same storage space, and Windows could potentially be using up a third of this before you even open the box. To put it in perspective 32GB is about 5 DVD’s or 7280 songs. Fine for day-to-day usage, but if you’re a photographer for example with thousands of images in high quality you’ll struggle to store them all on this drive. High end games can easily be 10 – 20 GB so you ain’t gonna be storing them on this type of laptop.

Spinning disc drives tend to be a little slower and will eventually be replaced with larger SSD drives once the price comes down to make them, but for the moment they are the better cost-effective option. Spinning disk drives at the moment are generally 500GB, so more than 10 times the storage of the above option, 1TB (1 terabyte which is 1000GB approx) and sometimes 2TB (2000GB approx). So if your intention is to store a lot of files, games, images or videos, this is the thing you should look for. The last thing you need to be caught out running out of space every 2 minutes.

Graphics is the next consideration. In reality for most use, most people will tell you that if you want to play high-end games a laptop is not an option, but this isn’t to say that you can’t play on a laptop, you just won’t get the performance you would from a desktop. If someone wants to play a particular game, check the box or website for that game first, and it will tell you the minimum specifications you’ll need to run it. They aren’t optional and again a lot of the time games cannot be returned, so if you’re buying the laptop for a game or games, start with researching the game first. Most laptops use an integrated graphics card, fine for video and images, but generally not for gaming, so looking for one with a dedicated graphics processor will be important.

Speed of the machine isn’t as important as it used to be, again unless you are running video editing, photo manipulation software or games, again I recommend that you check with the software for its recommendations before purchasing.

A couple of other things to note; most people assume that when they get a PC with Windows that this includes the office suite, as in Word, Excel, PowerPoint etc, but this is not the case. These have to be purchased separately as a yearly licence. It’s generally cheaper to do this when buying the laptop and you’ll get the home or student version for about €69 at point of sale (this may change) for a year, and for most people the home or student version is more than enough. If pushed to buy additional warranties or antivirus think carefully. Windows has a lot of anti-virus built in these days, and the ones they suggest in the stores are more for their targets then anything else.