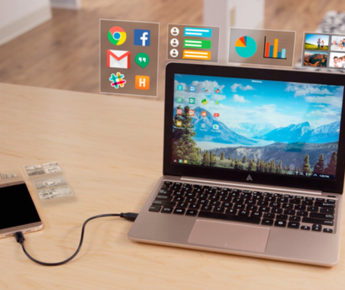 by ambyrne
Jan 9
2018
Lifestyle, Opinion, TechnologyIs your smartphone going to be your next laptop

It’s no secret that the cost of smartphones has gone up in the last few years, and the logical reason is because of all the bells and whistles that you now get from your handheld devices. The truth is that the internal hardware of your phone has come on leaps and bounds even in the space of a few months. Big tech companies have pumped huge amounts of money into research and development, and while you might think that it’s the likes of Apple and Samsung and the companies that create the handsets who are pushing the hardware forward, it’s also the chip manufacturers and their ever improving designs that has contributed to this growth.

The thing that people may or may not be aware of is that the chip companies who build the insides of your phone are also the ones building the hardware for your latest laptop. This is leading to one inevitable fact. The line between your phone and your laptop is growing narrower. You may jump up and say, yeah, but the way the phone works is not the same as my laptop, and to an extent, and depending on the operating systems you use on each, you’d be right.

Chances are, if you are a normal user, your laptop is running some variation of windows and your phone either iOS or Android. The idea of completely replacing your laptop PC with your phone seems alien to many people, but that day is growing closer. Just as an example, Microsoft has long-held the idea that they can get their operating system, Windows, running on all your devices. They even went so far as to release their own handsets running a pared down version of Windows to try to get people into that mindset. Google produces laptops called Chromebooks running Android, the same as most Samsung, HTC, Motorola and more, handsets, so the cross over is technically possible.

The main obstacle I believe is in people’s minds. The idea that they would sit at a desk and use their phone instead of a laptop seems a bit strange, and for many people they may not conceive of using another operating system for their day-to-day PC other than Windows, but it can be done. Android and iOS are fully capable of doing the lions share of what your Mac or PC can do, so perhaps the fact that the phone is so small puts a mental block in the heads of users, and the fact that things are done as apps and on the screen with your thumbs seems contrary to the old keyboard and mouse. 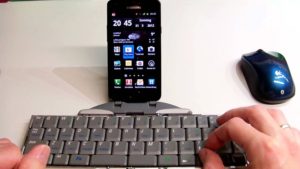 Make you phone more PC like with a keyboard and mouse

So, could you see yourself working from your phone rather than carrying around a bag with a laptop? Perhaps you are already comfortable doing so on a regular basis, but even so, could you part with the laptop completely? What if I told you that you could simply connect a keyboard, mouse and monitor to your smart phone and presto, you have a makeshift ‘laptop’. Okay, so it’s not quite that simple, but it soon may be.

Here’s a little experiment you can try if you think this idea is too far-fetched, and believe it or not this works on most Android phones. Find yourself a Bluetooth mouse and switch it to paring mode. Once you’ve done this turn on Bluetooth on your handset and search for the mouse. The assumption that most people have is that the phone will only connect to car kits and headsets, or maybe your smartwatch, but you’ll get a pleasant surprise when you will pick up the name of the mouse in the discovered Bluetooth devices. Not only that, it will connect. Best part, depending on the version of Android you are using, you may even see the familiar cursor icon and be able to move the mouse around the screen.

So, we’re still a bit off ditching the laptop just yet, but several hardware companies and accessory manufacturers have taken this one step further and created docks that once connected to your smart phone will hook up to a keyboard, mouse and screen. It’s an odd feeling seeing your mobile phone display appear on a large desktop monitor, but the initial surprise wears off very quickly and within no time you’ll have a browser window open and Microsoft Word running in the background. All of a sudden it doesn’t feel all that strange.

Right, so I can hear the voices saying, nice, and a bit of a gimmick, but now I have to carry a keyboard, mouse and monitor. True, if you intend to set up in your local café this probably isn’t the route you should go down, but more and more for companies that use hot-desking and shared spaces, having a row of generic keyboards, monitors etc and a simple docking port could mean that they save space and costs, not to mention everything you do is on one device. 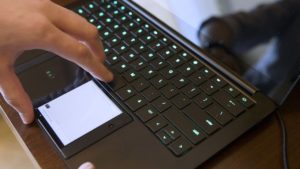 Some companies are taking this even one step further. Samsung have their own docking system called Dex which is a portable dock that will let you connect in this way, but one really interesting development comes from games accessory company Razer. Razor is aiming to give you the best of both worlds with a ‘laptop’ which has a slot where you insert your Razer phone. The phone makes up the brains of the machine, but plugging it into this additional hardware gives a bigger screen, obviously, but also larger hard drive space and expansion and accessory ports.

While this is still a concept device at the moment, the working model was displayed this year at CES in Las Vegas, and while this might not be everyone’s cup of tea, the prospect for businesses of having a unified device or better use of desk space is really appealing. The next logical step is just to offer this as a function of the phones so that once you are near a compatible set of devices you can simply connect. While all of this is technically possible, I think it’ll be a while before we see large groups of people leaving their shoulder bag at home in favor of just their handheld computer.