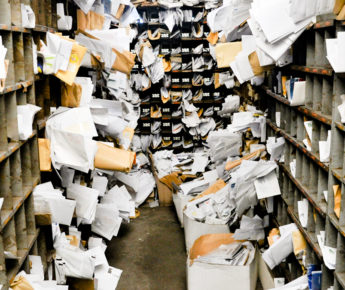 We’ve all been there. Our notification counter on the little envelop icon showing a number that makes us dread clicking. Our unread e-mails have spiraled to a level where we think we’ll never possibly be able to read them all. You know 90% is probably junk, be it spam, newsletters from that home wares shop you bought a spice jar off 4 years ago, or just notifications from a social media platform that you really keep meaning to turn off. They’re all in there, and can be, for the most part, ignored. Then again there’s probably one or two that you really need to read, action and reply. Now multiply this by 2, 3 or even more inboxes from personal, to work, to that address you use to sign up for sites thinking, ‘I’ll just never check that address’, and yet somehow end up dipping in and out of. We have reached mailbox overload.

Why is it that we get so frustrated at our physical postbox when we get takeaway flyers or adverts in on top of the small amount of regular mail, but when it comes to our digital mailbox or mailboxes we seem unable or unwilling to do something to sort the issue. Why are we just content to leave the messages pile up? And why, even though so many people in workplaces in particular complain about the volume of e-mails do we still have this issue?

Enter inbox zero. Developed by productivity expert Merlin Mann, the idea seems straightforward. He proposed that you should spend as little time as possible thinking about your inbox. He suggested that the best way to do this was to have virtually nothing in the actual inbox folder, and this becomes your ‘to-do’ list in a sense. Not that there’ll necessarily be zero items in there, but that your brain spends zero time worrying about it. I stress going into this that I did say ‘seems’ straightforward. The process I was to discover can be a challenge, particularly when you have several different e-mail addresses for different purposes. 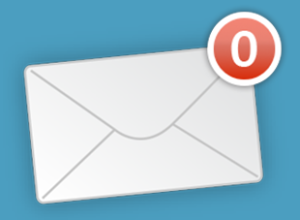 Email notification at zero, so satisfying

So why did I do it? Several things occurred to me as I began. E-mails can be used as a quick and almost automatic task list, as they come in, they can be replied to, actioned or forwarded on to someone else. If I could get my inbox under control not only would I have a more efficient day, but I’d be less worried about missing something important. Secondly, e-mail can be a great system of record for the important stuff. This can be come a challenge though if you have 10,000+ items to filter through. I also discovered that with less things coming into my inbox, I had less on my plate to deal with. I had unintentionally been spending time replying to messages and doing tasks that we’re not important really, but because they were coming in to me I felt compelled to do something with them. Less mails, more time, and more effort on the really important.

This was more than an exercise in housekeeping or keeping things tidy, having less flags meant I was looking at my phone (slightly) less and definitely less for work. This started reducing stress a bit. It also had an unexpected side effect, people I was replying to got part of what I was doing and started to only contact me via e-mail with things that needed to be mailed, and they knew that they would always get a reply.

So how did I go about it? Well there were some obvious things which I’ve mentioned at the top of this post such as notifications, but before all of this I needed a filing system. Most of us have a couple of sub folders in our e-mail, I just took this to the next level and started creating folders for different categories and areas. The temptation here was to go nuts and have folders for everything. I had to resist this and only create folders that are really needed and have a name that is meaningful so that I remember where I put things and where things should be going and filed into. Now I had to be ruthless and disciplined in putting things into the right folder as they have been replied to and actioned. That way only things that are left to do remain in the inbox. Voila, instant task list. 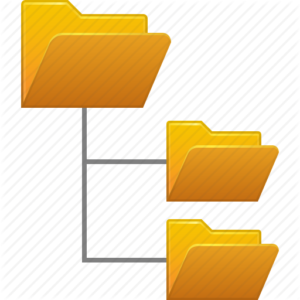 Folders with smart names is vital

Now to reduce the volume coming into the address in the first place. For this I had to set aside a couple of hours for some cleaning up and I had to ask myself a serious question as to what mailing lists etc I really wanted to be signed up to, the rest I was going to leave. Even I was shocked to find that I was on upwards of 50 mailing lists for sites and shops that I very rarely or never visited or purchased from. The logic was simple; if I really wanted a new t-shirt with an Avengers print, I could go looking rather then recklessly spending money when something cool pops up on my phone. Did I really need to be subscribed to the mailing list of every site I’ve ever signed up for or bought something from? Simple answer: no. Queue me spending 20 / 30 mins going through the inbox and clicking unsubscribe on each and everyone I could find, then moving them into a newsletters folder with the decision as to whether or not to completely delete them pending…

Now I had to do the same for any future ones that came in and obviously be more cautious about unticking that ‘subscribe’ box whenever possible. Next was the notifications.

It’s bizarre to think that despite the fact that we all get the notifications in our browsers and on our mobiles, we still seem reluctant to turn off Twitter, Facebook and Linkedin notifications via e-mail. Turning these off almost instantly dramatically reduced the number of messages coming in. Next came the spam. This was a little trickier and I had to rely heavily on the e-mail client and whatever spam options were available through my provider, but quickly I came to find that by blocking recurring addresses as well as ruthlessly marking things as junk life soon became easier.

Lastly came the rules. Some things you just know are coming into your inbox and for one reason or another can’t be stopped, such as utility bills or updates from your college, or whatever. This doesn’t necessarily mean they need to land in your inbox, and with a little bit of playing with incoming rules and scripts these could be automatically filtered into folders and I could get to them as and when needed.

This wasn’t an easy of quick process and in truth it was several weeks of being disciplined when things came in before I had everything down to a really smooth operation. Work inboxes were a lot more difficult, but don’t be afraid to set auto-replies and set specific times to reply to messages. You may find that people will start contacting you more directly, or only at designated times. Even better you may find that people get the hint and stop sending every random thought to your inbox. Auto-replies were great here, normally we use these for when we’re out of the office. I started using them internally and externally to say thank you for the message, and if it was urgent or quick it was easier to call or instant message and if not I would reply at designated times. Very quickly IM’s became the norm for quick questions, and e-mail was almost exclusively for external communications.

Almost 5 years later and I have achieved as close as I think I can to my view of inbox zero. Now I am fairly confident that when my phone does beep with that all too familiar sound its a mail that I want or need to read. E-mail still plays a huge part in running any business, but my decision to attempt this on personal as well as business addresses meant that I now feel more in control of e-mail and my personal inbox is truly that again, personal. I’ve even found myself using it more to communicate with friends and family again, an unexpected but pleasant side effect.

I’d encourage everyone to spend the time moving to inbox zero and to take back control of e-mail. It isn’t going away any time soon so why not make it work for you.

please note this article was first written and published for playtank.net