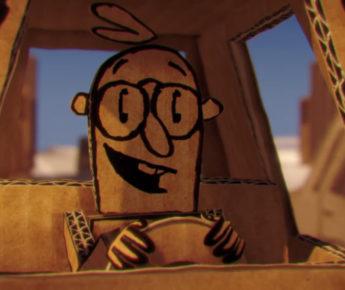 by ambyrne
Jan 29
2018
Opinion, TechnologyCardboard is the new silicon

It’s a strange thing for someone like me, who is very anti-paper and pro everything technology to find a strange fascination with all things cardboard. If this seems to you as the reader a massive contradiction, I have no choice but to put my hands up and agree. But, before you start laughing and asking how much cardboard I may have stashed in my apartment, let me clarify what I mean. I’m talking about the fusion between technology, a traditional silicon, plastic and metal area, with the ability to augment games and even reality with the simple material of cardboard.

I’ll be clear though, I still hate having bills mailed to me in paper form and having endless streams of documents printed out in work, and still very much believe that moving away from paper in many areas can only be a good thing, but I can’t help be fascinated by the use of folded card to add to your technology experience. Even some of the big technology giants have recently embraced this cheap and often homemade way of augmenting their expensive and hi-tech equipment, and yet, somehow, this has not only worked, but it’s become something of a source of retro-creativity.

I’ve talked in previous posts about Virtual Reality and Augmented Reality. Both technologies are still very much at the early stages of adoption for the majority of users. Even big developers and companies are only slowly moving into the VR space for example, waiting to see if the public really pick the technology and run with it. One of the major challenges has been and remains to be mass adoption. Indeed to buy a VR headset for example is going to set you back several hundred Euro and yet you’ll struggle to find too many games and even less movie titles that support it.

But along came Google with a novel idea. Your mobile phone probably has a fairly decent screen. In fact in many cases if may be the best resolution screen you own, all be it very small. Having said that though, the size is fairly similar to that of the dual screen on a VR headset. So what if you could use your phone to do basic VR? Enter the Google Cardboard. A very cheap ‘device’ made of simple cardboard and 2 glass lenses, which, when combined with your phone can be used to create basic VR experiences at a cost of less than €5. 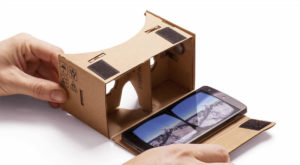 Google even went as far as allowing people to download the template which could be printed to allow people at home to make their own cardboard headset, It was a great idea to get as many people as possible to try the VR experience. While the titles and experiences available on your phone might be limited, it is a cheap and fun way to get yourself into a virtual world without the need to buy any additional hardware. Although the mass uptake of the boxes wasn’t what was anticipated, they are still very much used by gamers, developers, marketing companies and more. A great example is a VR tour of a potential house or apartment before you go and see it in real life, or the ability to ‘drive’ a sports card that ordinarily you would never get to experience.

But this isn’t the only example, and, more recently there has been a push from many sides to experiment with low-tech equipment to add to the experiences of the users of the hi-tech gear. It only takes a quick web search to find examples of modifications and additions to hardware like the raspberry PI using paper, cardboard and even LEGO. What’s really interesting about this merging of worlds is that the potential for learning and education, particularly for getting kids into technology and hardware, is huge.

Nintendo Labo allows you to build robots from cardboard

Nintendo is embracing this for their multi-purpose games console the Switch. In the last few weeks they have launched their own take on cardboard technology in the form of Labo. Labo is a collection of what they are calling projects which kids (of all ages I’d say) can use to turn their Switch console from a standard games unit into everything from a piano to a rockem’-sockem’ style robot kit for playing against on-screen characters.

Nintendo is betting that these kits will help young people learn, play and explore the possibilities. Although not as cheap as you would imagine given the materials that the kits are made of, the idea is sound. A make it yourself toy or game that appeals to the younger generation who are technology obsessed. Think of it like arts and crafts for the computer age.

These work by using the existing technology and sensors in the hardware and simply adding a cardboard interface. There are so many advantages, not the least or which getting kids to play with crafts again, the hope is that with one of the kits people will be inspired to take what they have learned and create something new. Also, for kids, this gives another excuse to pester parents to buy the hardware, explaining that it’s not solely for games, and that they can learn and build if they have a Switch at home. Nice try kiddo, but it’s not the worst argument I’ve heard.

While these examples are still the exception at the moment there seems to be a growing passion for this cheap and homemade tech as well as a fascination with the old materials like cardboard. In fact there is a French games maker who is creating a series of cartoons, all made through Unity, a game making software tool, where the ‘hero’ and everything in his world are made or cardboard. While this isn’t physically using the paper based tools, having seen one of the cartoons, you can’t help but feel it’s an interesting and warm appreciation of cardboard. I wonder how long this low-tech material will continue to be used and how many more companies will embrace this DIY method to increase the usage of their tech.