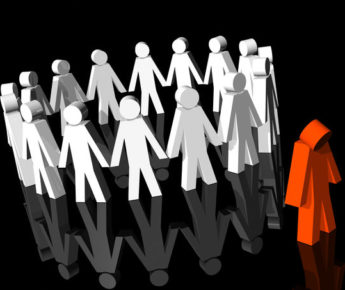 by ambyrne
Apr 28
2018
Lifestyle, OpinionSocial Isolation: 1141 is the loneliest number

We’re all increasingly living in isolation. It seems like such a contradiction given the perceived importance and focus on social media in our lives, but the last few years have made me reevaluate the actual interactions we have with people and the way in which we connect with others. I would regard myself as a highly social person, in fact I get an uneasy feeling when I’ve been on my own for too long or if I don’t interact with people frequently, but the sad truth is I feel lonely more often than I’d like to admit, and I’m sure I cannot be the only person who thinks this way. Social media isn’t real life and yet we’re using it as a means to escape from contacting people and interacting in the real world rather than as a tool to make this easier.

Facebook and Twitter have meant that we can reach out to people across the world and spy on the people we went to school with, comparing and contrasting our lives with the potentially hundreds of so-called friends we have on these platforms, but something that someone said to me years ago has started resurfacing in my mind. The simple fact that although I know a lot of people, both online and in real life, there are very few that I would hold as my close friends.

I often talk to people who have a small, close-knit group that they see regularly, or socialize with, not exclusively, but definitely more frequently than anyone else, but, and maybe this is my experience, these seems to be fewer and farther between and less the norm. People seem more and more to float between circles, move from group to group and, rather than forming strong lasting relationships, become temporary ‘besties’ with whoever they have gravitated towards at that time.

I’m not for a moment criticizing the social butterflies among us, but I’m personally struggling in the last while with the sense that I have missed an opportunity to create a better support network. There are great people in my life, friends who have supported me through various times and trials in my life, but as I have kept people to a certain extent at arm’s length I know that it would be unfair to call on some of these people should I need it. I know they would help out, but I fear this is more because they are truly helpful people rather than it being exclusively for me as their close acquaintance.

Never has it been clearer than in the last six months on the days when I have stayed at home with my daughter. The lack of adult company and conversation is almost palpable after a while, and I’ve had to rely on the few evenings I can get out and sit in a bar with people I know to fill this space. Problem is that it’s seldom the same people on more than one occasion.

Trying to arrange a designated day and time for a group of friends to meet has become virtually impossible. Work, family, lack of money or whatever seems to be the main verbalised reasons, but in my case there is the very real truth that however I would like things to be different I’m just not that close to a lot of people and there’s no sense of urgency or need to see me and vice-versa. In my long years of socializing, getting to know hundreds of people I’ve failed for the most part to establish the types of relationships where people will be there without another reason other than I’m missing company.

I don’t believe I’m alone or unique in this situation, and there are many reasons why this isn’t spoken of more often. Aside from the obvious stigma of telling people who you are lonely or struggling with isolation, there are things that occur day-to-day that fool us into thinking we’re not experiencing this. When we’re in work we develop bonds with our colleagues, and these do often become strong relationships and people end up at each others weddings, christenings etc, but often these fall down when people move to another job or even another role. Even in work you can be isolated from people if our roles keep us from getting close to people or have us working alone.

I myself have changed role, company and more over the years and although I, like everyone in that situation, pledge to remain connected and in contact with everyone, it’s all too easy to lose this friendships and let things fall by the wayside. Still connected to them on social media seems to be sufficient in this day and age and even after a little while of comments and messages, the distance in the virtual world makes contact in the real world seem all the more improbable. 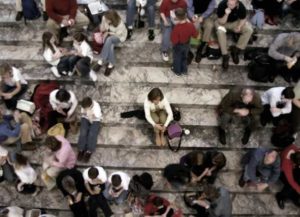 A vicious circle ensues where you end up not contacting people as much. Internally you worry that because you haven’t seen someone in a while means you shouldn’t send them an IM online because they’ll brush you off or worse, and the cycle and spiral to further isolation continues. There was a time when I remember carrying out multiple conversations via text or online at the same time and having virtually no time throughout the day when I wasn’t in contact with someone, and maybe as part of that tech generation, that’s the problem. I was spoiled for choice and didn’t have the time to feel lonely, because if I felt someone was drifting away I could just gravitate to the next.

This isn’t as easy or as practical these days. I don’t have the time to reply when people do text and when have a chance the moment has passed and I feel like I’m intruding. 1141 Facebook friends and if I get truly to a point where I need something and I’m not just putting out a general message for attention I feel like I have to choose very carefully who I should contact. It’s not that I don’t think people care or that they won’t reply, it’s just that everyone has their own thing, their own challenges and I’ve just become acutely aware of this now that I’ve had the time and distance from people to realize the situation.

There’s no simple fix. There are people I see online who I would love to reconnect with and love to see again, and occasionally, just occasionally I reach out, but it feels clumsy and without real purpose. The argument could be made that there shouldn’t need to be purpose in seeing old friends or colleagues, but once in a while when I have contacted people and suggested a catch up I’ve been greeted with ‘why?’ as a response. Obviously not that bluntly, but trying to create a purpose like an upcoming event, or suggesting waiting until you can gather ‘enough’ people is the more polite and socially acceptable way of pushing back and saying, ‘sure, but only if there’s a reason other than just because’.

If you’re reading this and thinking that you are someone I know that I could always call on, please take no offence to this post so I know there are people out there, but I’m speaking more generally and more about my own failure to either acknowledge this, or to have made a connection strong enough that I wouldn’t feel like I’m being a burden. More than that, I’m commenting more on the fact that I know there are other people out there who are experiencing a growing sense of isolation, even though there are people around all the time. There may always be people to have a drink with or have the fun times, but the real challenge these days is to find someone to confide in. Finding those few people who can be your support network and would drop everything if it came to it seems like a much more difficult prospect in the last few years. Perhaps I was brought up on too many movies like Beeches which promised that friends of old would always come running should it be needed rather than the lip service and support the convenient that we all are guilty of giving.

So, is there a purpose to this post? Am I seeking people to do that usual ‘you alright hon?’ thing we see on Facebook so often? Was this just an excuse to vent about how I’m feeling at the moment? The truth is I’m on the uptick from this sense of being alone. The last few weeks have been tough, not even taking into account the usual struggles we all go through as well as the occasional bad patched and blue spells I have, but it’s forced me to be more introspective and more than that it’s given me a chance to see how people fare with disconnection and lack of contact with people. I could make a commentary that I’ve a new-found respect for stay at home dads as there is a subtle and unfortunate exclusion at times, even through the feeling of being uncomfortable at parent groups etc, but this is just a symptom and not the full story of why this has come to light for me. 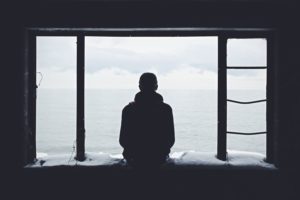 If your circumstances change who is there?

The point, therefore is for you, the reader to take a moment to think about what would happen and who would be there if your situation changed tomorrow. If you got sick or had to move, is there a sufficient group of people and a strong enough support structure left to help you when you can’t do everything for yourself. There’s room for lots of types of friendship and social interaction, but don’t make the same mistakes I’ve made in keeping people distant and either intentionally or unintentionally separating and cutting myself off. Take a moment to appreciate those people who are there for you too, as I’ve while I’ve been writing this and I know will be the first to respond. These are the people to keep close, not just when they need you but when you need them too.

I will acknowledge this is a very different post to my usual tech or operations, or even opinion on a topical issue, but it’s an issue I’ve been more acutely conscious of since I ran a business years ago and found myself alone in the office on many occasions, and unable to discuss the problems and worries I had with people. Leaving and doing something different seemed like the right idea at the time to save my sanity, but this continued for the next few years and has taken me until now to articulate. If you are reading this and feel a sense of social isolation or the coined phrase of being an ‘impostor’ where you are constantly surrounded but still feel alone, please take heart in knowing that you are not alone and there are many people who are experiencing this state and often are distracting themselves or just not ready to talk about it openly, and this is fine. There’s no easy solution to this and in truth I’m hoping this will get people thinking and with some luck someone smarter than me will have an idea as to how people can effectively deal with this. In a strange way, I’ve always been a bit weird and felt more comfortable feeling like the proverbial rock or island, but the older I get the more I realize this is not only unhealthy it is not in any way, shape or form necessary.

May is mental health awareness month so please check out http://www.yourmentalhealth.ie/ and http://www.mentalhealthireland.ie/ if you or anyone you know is affected by anything above.